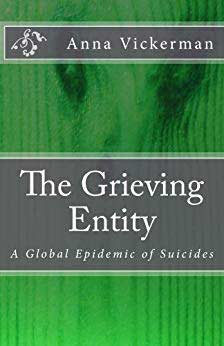 A Global Epidemic of Suicides

“The Grieving Entity" features unimaginable speeds, Infinity Speeds. The value of pi, otherwise expressed as π is the representation of the ratio of the circumference of a circle compared to its diameter, equating to the fraction 22/7.

However, if you attempt the division, as a decimal representation, this never ends, it is an example of Infinity.

Another example of infinity is the vastness of space within the universe. It stretches out through our Milky Way galaxy, through inter galactic space, passed or through billions more galaxies, countless trillions of light years distance from us.

Peter Bryant was a Special Investigations Officer with Earth’s Galactic Defence Headquarters (GDHQ). When he hired Angela Smith as his Personal Assistant, neither could have foreseen what lay ahead as they embarked on their first investigation together.

The victims of a global epidemic of horrific suicides seemed to be possessed. Possessed by what? By whom? From where? Their investigations pointed to an incredible source, many light years from Earth.

Meanwhile, Angela’s estranged husband Steve, was about to embark on the journey of a lifetime, as the Captain of a mining freighter. If this latest mission was successful, he would receive a bonus of untold wealth, making him the richest Captain in the galaxy.

Steve’s Mission Commander on this unique operation was the enigmatic Stellar. She had planned all aspects of the assignment in minute detail. It couldn’t fail…or could it?

As the voyage continued, Stellar revealed her mysterious and stunning background to Steve. Would he resist her hypnotic attraction? Or could he break her spell and return to his wife, Angela?