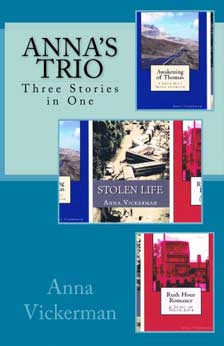 These stories are shorter than standard novels and were originally published on Kindle individually. However, I have combined them into one larger, full length book and republished on Kindle at a discounted price, and also made a paperback version available.

“Awakening of Thomas” is the story of a young man’s sexual awakening during a cycling holiday on the Isle of Skye in the Scottish Hebrides. It is about young love, temptation, and coming to terms with the consequences.

Thomas Johnson is planning a cycling holiday with his best friend Jack Friedland. They intend to drive the long distance from their northern England homes in Thomas’ battered car and base their cycling holiday around Kara’s guesthouse, Kara being an old family friend.

However, things don’t turn out as Thomas was planning, in more ways than one. He takes his university pre-study work with him, intending to learn as much as he can before commencing his studies to be a lawyer. However, what he actually learns on his travels is nothing to do with his legal studies!

When Thomas eventually returns home, he is in for a shock, but not as big a shock as his girlfriend, Melissa gets! How can they cope and come to terms with what has happened to them? Is there any future for their relationship? What effect will the pending divorce of Thomas’ brother Ron have on them all?

Everything starts with the planning of an innocent cycling holiday, where will it end?

"Stolen Life” When Daniel Williamson boarded a train to visit his brother in London for a rock concert he had no idea what fate had in store for him.

His terrifying experience that day changed his life forever, but at what cost? His young travelling companion was soon to find out…with tragic consequences.

Was there anything Daniel could do to rectify the situation? Could he help his young friend? If he could at what cost would it be to himself?

“Rush Hour Romance” is about young love, plain and simple. When a young boy starts work and travels each day on a bus, he is bored, but his boredom is soon interrupted.

Likewise when a young girl starts work on the same day and travels on the same bus, she notices the boy. Are they going to talk to each other? Will they go out on a date? Or, are they too shy?

Trouble awaits the boy at work though, in the shape of Val, a voluptuous older woman who wants to ruin everything...