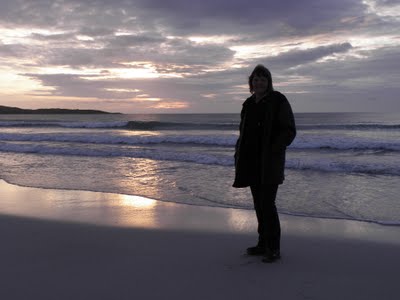 Hi, I am Anna, I live in Yorkshire, England. I have always loved writing, it was all I ever wanted to do. My first stories were relationship based Sci-fi tales started in the late seventies. However, after a couple of years I had to make the big decision and gave up writing to pursue a paying career and bring up a family.

When I re-discovered the old manuscripts in 2010, I read them all with renewed interest. Once again they became all consuming, I re-worked them, I updated them, and I became inspired all over again, or was I infected? But, this time round, the difference was I had the time to devote to my projects.

The first two re-worked were "The Onslaught Cycle" and "The Grieving Entity", originally from 1981. But, I needed to know if I could still construct a story with credible characters and twists and turns, so "The Cemetery" was penned. It is shorter than the average novel, but I was pleased with the outcome. For me it was the beginning of a serious move to create new, and ever more ambitious projects. It was published on Amazon in 2011, followed in 2012 by the two Sci-fi re-works.

In 2014 I wrote 3 shorter love stories and combined them into one book called "Anna's Trio".

Then in 2014 "Stephanie" came along, about a woman who lacks self-confidence outside work. She has little experience with dating, but when she falls in love with a stranger, will it last, or is she heading for a fall?

Then in 2017 I completed “Smile Of A Stranger”, about a chance encounter, a brief moment in time which led Garry to believe that he could recover from the hurt he was feeling and start to live again. But, there was a problem, a little matter of the truth! Would it get in the way of any future happiness or was deception the way forward? His son Matthew knew right from wrong, but did his father?

Now, finally, after some 28 years we have "Mindwreck", a Sci-Fi Story, an Adventure Story and a Love Story originally hand written in 1981. In 2010 it was typed into a Word document with new chapters added. It was then proof read and further improvements made. Proof reading sort of ended in 2015, but then in 2018 and 2019 it was vetted again until it received the thumbs up. So, you can see that it hasn’t exactly been thrown together in a rush! Anyway, I hope all the time has been well spent and you enjoy reading Mindwreck.

You can find more information about my 7 books via "Anna's Books" on the website menu.